I realize that I have been away from blogging for a couple of months and will now have to work hard to get both of my readers back. But I can explain: I stopped blogging in January in order to meet a publisher’s deadline for my inspirational book on death–it won’t be out until next January, so do your best to hang on until then.

I thought I would start blogging again in February, but I knew I’d be taking my family to Florida for two weeks (I’m on sabbatical), and I didn’t want to start up only to stop again, letting the whole world know–or at least my two readers–that my house was vacant and that my flat screen TV was theirs for the taking (it’s only a 46 inch screen, so it’s not over the top worldly).

Thursday night we came back from Florida, watched a little TV, and then I thought it might be time to reintroduce myself to the virtual world. Fortunately for me, nothing of theological significance was happening in West Michigan while I was away, so it’s not like my absence encouraged Grand Rapidians to rethink the doctrine of hell or anything.

In case you’re interested, we had the perfect vacation. Four days in Orlando: the obligatory Magic Kingdom, whose animatronic rides are a sad metaphor for our country–amazingly fresh forty years ago but now pretty much over the hill. Tomorrowland makes the fundamentalist bus ministry seem cutting edge; wax presidents that can stand by themselves and turn their heads no longer seems magical; and the frequent parades that encourage us to believe in ourselves and celebrate our dreams–“whatever they are”–are Disney cynical. My son said that his dream was to take over the world. Should that be celebrated? I told the cashier that my dream was for free refills. She brusquely dashed my dream, not more than ten minutes after the last float danced had by her stand.

Sea World was great. I have always wanted to take my kids there, as it was my favorite place growing up in Northeast Ohio, but just when my oldest child was old enough to appreciate Shamu, Six Flags swept in and bought out the Cleveland Sea World, made a mess of their new park, and turned what was left into condominiums. Yea capitalism!

The truly sad part about Sea World was the shell that used to be the Shamu show. Because of the tragic death of the trainer last year, the trainers no longer get in the water with the whales. All that is left is for the four or five Shamus to jump a few times, splash the audience with their tales, and endure long speeches from a young trainer talking about how important it is to believe in yourself. My son, apparently the cynical one in the family, noted that the trainer may have believed in himself, but apparently his boss didn’t believe in him enough to let him dip his toe into the water. My son also noted that the Orca tail necklace which the trainer dramatically hung on a child’s neck as a reminder to always believe in herself–the same necklace was being hawked for $5 to put upon parents right after the show. I apologized to my kids and told them that the Shamu show used to be great, and that, of course, our unhappiness paled in comparison to the trainer who lost her life.

We rinsed off the sappy “Believe in Yourself, Celebrate Your Dreams, Whatever They Are” lowest common denominator sentimentality of Disney and Sea World by actually swimming with dolphins at Discovery Cove. This was a wonderful day, and I highly recommend it.

We then spent ten days with my parents at their rented home in Sarasota, reconnecting with our Mennonite and Amish relatives in the suburb of Pinecraft. This is where the Amish migrate during the winter, and where some of them at least relax their usual Amish ways (some prefer houses with TVs and more than a few wear bikinis–with head coverings–at the beach).

Now we’re back, and I’m ready to blog. I’ll have a few things to say about Bell’s new book. I think I’ll wait to see what others, such as Kevin DeYoung, post, and then fill in the cracks (if he leaves any, he’s pretty good) with a few observations of my own. I’m actually going to try and write a 100 page book response in the coming month, to come out around the middle of April. Quentin Schultz, an accomplished communications professor at Calvin College, interrupted my vacation with news of the tumult in the blogosphere and asked whether I would like to publish a short book with his publishing house. I read Bell’s book yesterday, and realizing that he learned nothing from “Don’t Stop Believing” (I know he has it, because I put one in his hand), think that Quentin’s idea is a project worth pursuing, to you know, further the conversation.

In the meantime, I encourage all of you to believe in yourself, the power of friendship, and celebrate your dreams, whatever they are. Man, it’s good to be out of Orlando.

To prove that I’m not making any of this up, and I really was on vacation, I photoshopped my family into this picture of a dolphin. Judge for yourself: 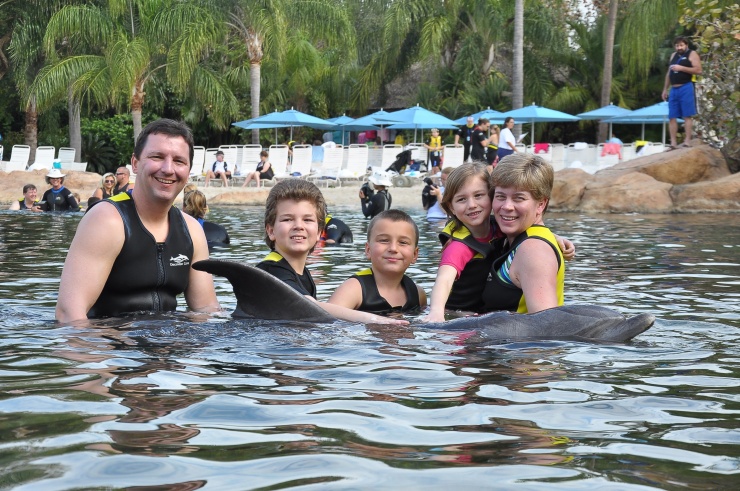