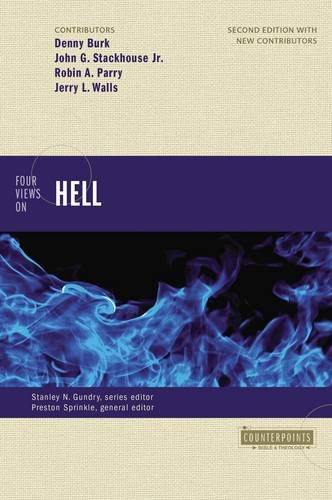 Zondervan’s new Four Views on Hell is another stellar volume in an already valuable series. I probably assign too many of these “views books” in my classes, but I don’t know of a more economical way to put in students’ hands the best, and most current arguments, from all sides. I finished this one in time for our class discussion tomorrow, and I will encourage students to get and ponder it (and next semester will no doubt be assigning it).

Each of the four views builds on a different foundation. Denny Burk grounds the traditional view of everlasting conscious punishment on ten individual biblical texts. John Stackhouse largely bases his annihilationism on the character of God (a holy and benevolent God would send people to hell but would mercifully allow them to go out of existence after sufficiently paying for their sin). Robin Parry grounds his universalism on the larger metanarrative of Scripture (God’s redemption must be as large as creation or it is not complete). And Jerry Walls bases his Protestant view of purgatory on the writings of C. S. Lewis.

This last point is similar to Greg Boyd’s chapter in Zondervan’s Four Views on the Historical Adam. When evangelicals want to make a point with scant biblical support, they seem to think it is sufficient to find favorable quotes in C. S. Lewis. I enjoy Lewis as much as most people, but it’s good to remember he was not a theologian. Not only is Lewis not equal to Scripture, neither is he an expert.

I hold the traditional view of everlasting conscious punishment, as does everyone where I teach (the last line of the Cornerstone Confession begins, “The lost will experience everlasting conscious separation from God as the just punishment for their sin”). But I still learned from Stackhouse, Parry, and Walls as they interacted with Burk’s traditional arguments. We traditionalists must be careful not to read too much into the biblical texts. While there are compelling reasons to believe Scripture teaches everlasting conscious punishment, it is possible to coherently read many of the texts in an annihilationist way. Still, it is hard to believe Stackhouse when he says annihilationism “enjoys about as strong a warrant in Scripture as I have seen can be offered for any doctrine” (62). Really? Then I am a seriously bad reader!

For my money, the two Scripture passages that most clearly teach everlasting conscious punishment are Revelation 14:11 and 20:10. So I was most interested in how Stackhouse and Parry would handle those (Walls believes in everlasting conscious punishment, but with the possibility of getting saved and leaving hell). Stackhouse notes Revelation is apocalyptic literature that “is typically extravagant, poetical, and allusive.” The terrible description in Revelation 20 is God explaining that the worst sinners (i.e., Satan, the beast, and the false prophet) will suffer in the worst way imaginable. But God is speaking in “poetry” rather than “metaphysics” (74). Of course, this hermeneutic cuts both ways. If Stackhouse is correct, it begs the question whether God’s descriptions of the glories of the new earth are equally exaggerated.

Regarding Rev. 14:11, Stackhouse says “the damned enjoying ‘no rest day or night’” means they are “doomed never to enjoy [God’s Sabbath] rest.” It doesn’t necessarily mean they will remain alive to suffer forever. Parry says both Rev. 14:11 and 20:10-15 “are followed by salvation postscripts” that imply everyone involved will eventually be saved (123-24). I’m not sure if Parry thinks Satan himself will ultimately be reconciled to God (though this seems to be implied in his exegesis), but Stackhouse suggests the devil will eventually at least be annihilated (78).

I am not persuaded by their arguments, though I am glad to have read them. There is much more to chew on in this book, such as the love and justice of God, what our sins deserve, the possibility of post-mortem salvation (and why the Bible doesn’t hint at this), a Protestant view of purgatory, and of course, C. S. Lewis! If you want to see the strengths and weaknesses of all the views, this is the book to get. Big thanks to Preston Sprinkle for organizing and editing this stimulating conversation.