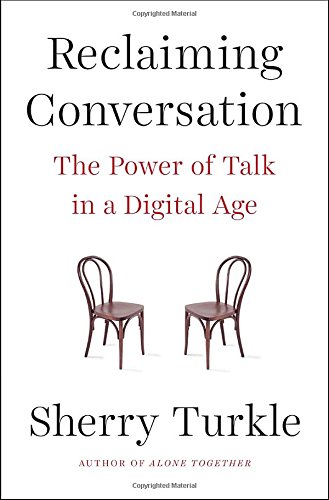 I just finished Sherry Turkle’s book, Reclaiming Conversation: The Power of Talk in a Digital Age. It is a bit repetitive and longer than it needs to be, but it also makes many interesting points about the influence of computers and smart phones on us and our culture.

Turkle’s main point is that constantly being online destroys conversation. Not just in the obvious way, when everyone is on their phone at dinner, but also in subtler ways. Our smart phones cut us off from each other. We don’t learn to read faces and voice tones that we’d pick up in a normal conversation. We lose empathy, the ability to put ourselves in the other’s shoes and appreciate her perspective. We never allow ourselves to become bored—as we fill our down times with whatever we can find online—and so we lose the depth that comes from stillness and being alone. We become shallow, flighty people that have less to offer our increasingly shallow and superficial relationships.

The good news, as Turkle often reminds us, is that we are resilient people. Once we unplug and give ourselves time and space to enjoy unstructured conversation with others, it doesn’t take long until we enjoy its benefits and begin to recover our humanity. Conversation is the talking cure.

Along the way Turkle has a lot to say about technology’s effects on young people. They would rather text than talk because it seems safer and easier to get exactly right. Conversation is scary because it is impromptu. There are many ways to say the wrong thing or something you’d like to take back. Texts can be perfected before hitting send. There is less room for error. But also for intimacy.

Social media has generated youth’s fear of missing out (FOMO). Young people tell Turkle that even at parties they check their phones to see what else is going on. They find it hard to enjoy a perfectly fine party for fear that something a little more fun is happening nearby. Even on dates they duck into restrooms to check who else may have swiped right on their picture. FOMO makes it difficult to commit.

Turkle also has a lot to say about family. It’s not just the kids who are constantly online. Parents bring their phones to the table, to pitch and catch, to the amusement park. We can spend an entire day together and yet not really be together. Many kids say they hope to raise their children the way their parents wanted to rather than the way they actually did.

Turkle also takes on education, including the popularity of wired classrooms and online classes. She warns that such innovations are removing the main thing that makes education work—the face to face, thinking-hard-in-the-moment-give-and-take among teacher and students. Her book convinced me to double down on my no technology in the classroom rule. I have allowed laptops for taking notes, but she persuaded me even that is a bad idea. Students who take notes on computers tend to become stenographers, taking down every last detail. Taking notes by hand forces students to select the most important parts. It teaches them to think. If only they knew cursive!

There are many more provocative nuggets and vignettes in this book. I recommend it to anyone who wants to think deeply about how technology is influencing us individually and communally.